As part of our ongoing focus on the core gameplay elements of Post Scriptum, we have spent the last couple of months working towards a game that rewards teamwork and tries to further discourage lone wolfing.

One of the biggest challenges for us revolves around our combined arms gameplay, particularly the Anti Tank meta vs our Armour, since infantry Anti-Tank will often spend much of their time hunting armour rather than participating in battle we introduced a rebalanced a couple of patches ago that addressed the concern somewhat, making the Anti Tank much less effective on his own.

This had the inherited drawback of making the Armour crew much more of a challenging issue especially with how the current spawn system works. To address this we’ve been working towards making Tank gameplay more dynamic and challenging.

With the next major update, we will be introducing a Tank Deck System, this new system will replace the old random spawner that our players didn’t like very much, and while still partly randomized it puts the choice and control of tanks more in the hands of our tank players.

How does this new system work?

To understand the difference we need to explain how the old spawner worked.

The old random spawner worked on a set of spawners called “Recon”, “Medium/Light”, and “Heavy” these spawners contained a list of available vehicles based on the layer that it was on, every time the map changed or restarted the list of vehicles is shuffled and a single random vehicle in each pool is picked, this had the benefit of not knowing what armour you’re given for a battle, with the drawback of sometimes being pretty unbalanced.

This also meant that once you knew what the enemy tank was, you knew that this tank would be present the entire game and while it works in theory, it did mean that your tank matchups can sometimes be unbalanced and with tanks like the King Tiger you could be reckless at not much of a consequence.

Killing tanks also wasn’t very rewarding as you knew it was a matter of time before another one would be back on the field. All of this culminates into a pretty mediocre tank experience.

These tanks are of limited quantity and so you will need to use your armour cautiously as you could very well run out of armoured vehicles, in which case you will need to rely on Anti-Tank guns or Anti-Tank infantry. Losing a tank like a King Tiger will not only cost your team tickets but the tank will not respawn back in for the rest of the game. Below you can find a breakdown of the various elements and states of vehicles you’ll be presented within the new Spawner. 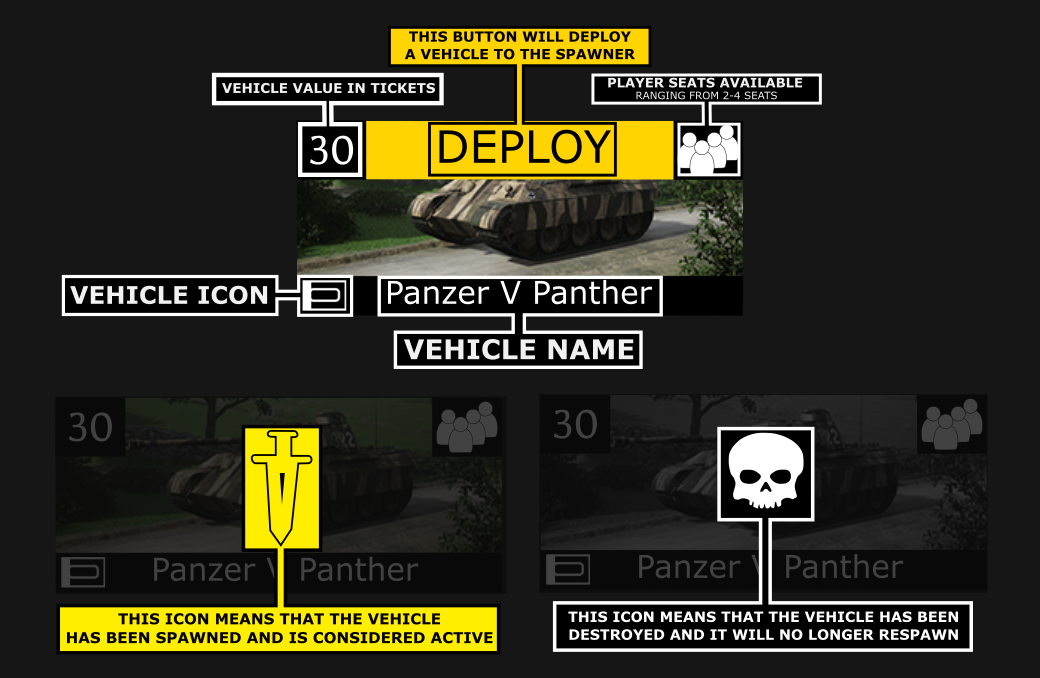 There are currently 6 decks per spawner type for each team. Across all 3 Chapters.

Every time a map restarts or changes the decks are shuffled and 1 random deck of each type is picked out to make up your tank deck for that round. The benefit that this new system has is that it allows flexibility for tank crew, in the sense that they can pick their own tanks and the combination of tanks that suits their needs. For example, both armoured crews could take out 2 Churchill tanks instead of being forced into picking one of each category.

This makes the engagement of tanks much more dynamic between not only the opposing tank crews but also to infantry Anti-Tank who will have the ability to take out a tank for the rest of the game, thus making their efforts more rewarding, bearing in mind that hunting tanks now is much more dangerous with several tanks being at play.

The Commander also got a treat with this new system as he has the ability to see what tanks are available to his team, what tanks are dead and what tanks are active in the battle (As long as he is close to a radio of course). This gives him more information to be able to better direct tanks on the battlefield.

We can’t wait to share more about this new tank system very soon as we enter into public testing.


Moving on from the new spawner, we’re also going to address a couple of other issues with the tank

We’ve added a brand new Panzerschreck model to the game, this new model will replace the very outdated model we currently have in the game, this will make aiming a bit easier and more accurate to this historical counterpart. 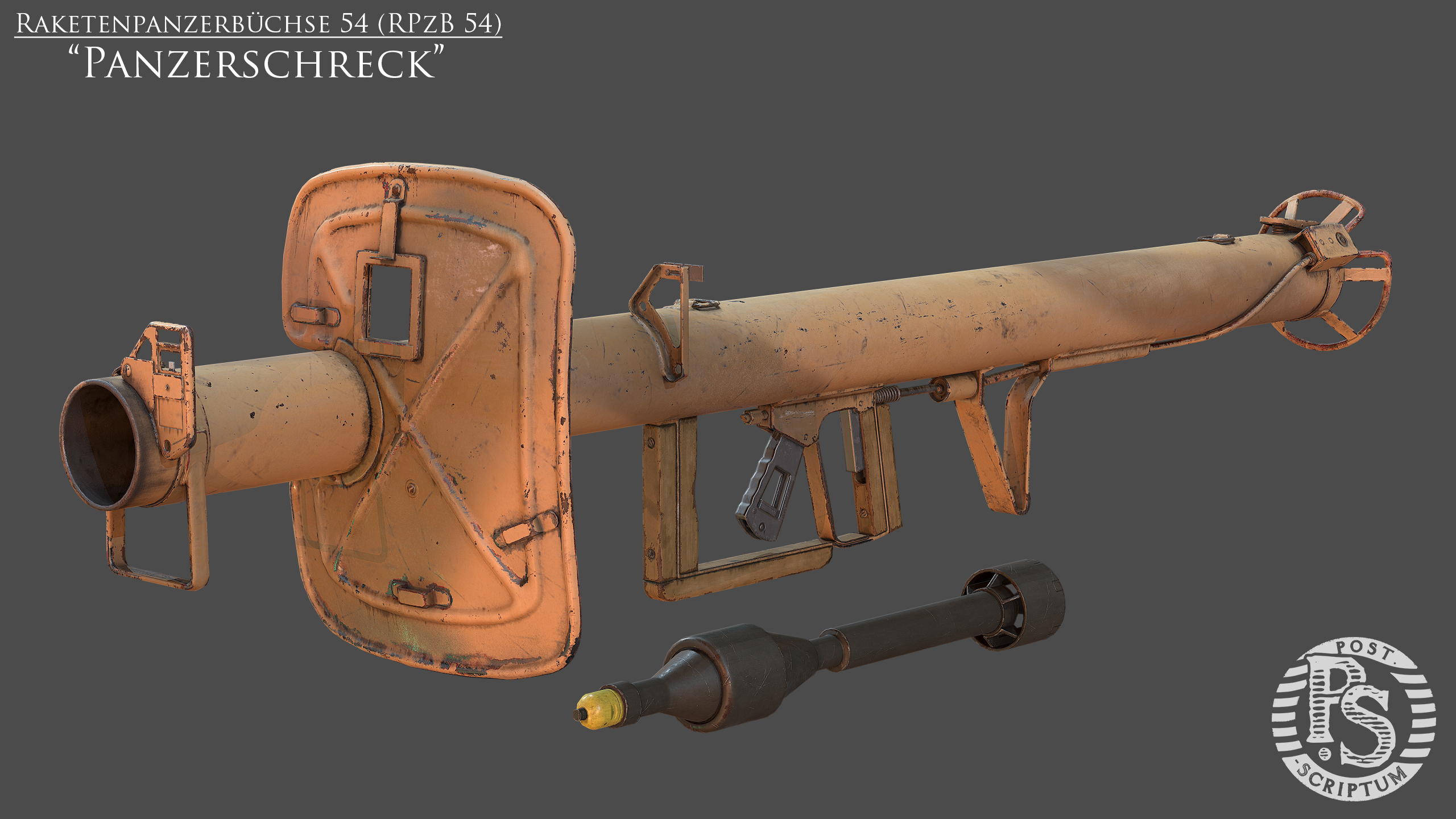 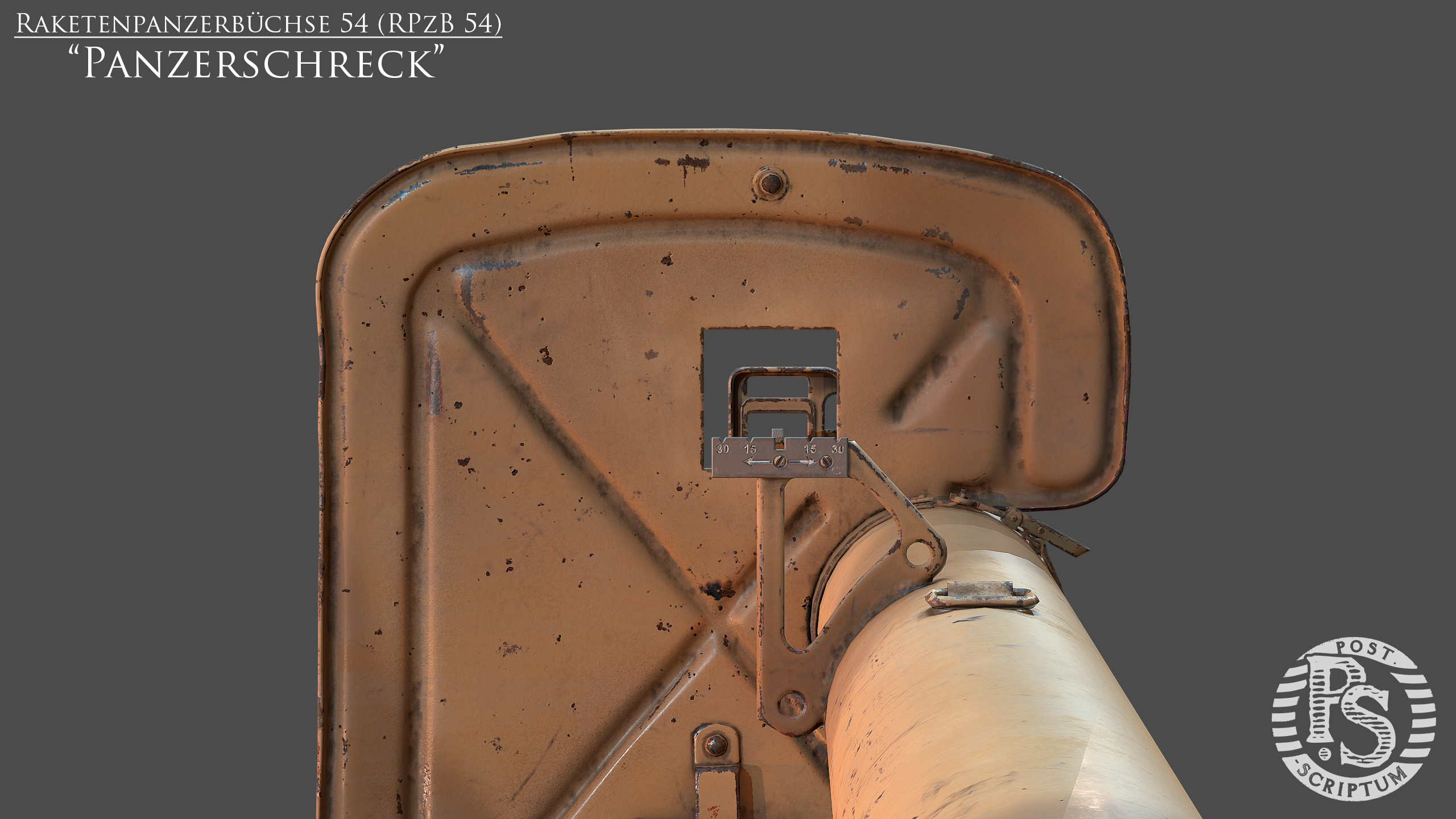 Joining us on Chapter 2 in the near future is a new StuG III model, namely the Ausf. A variant which was one of the first StuG’s to see service during the war, this particular model saw limited action during the Battle of France in 1940.

Built on the chassis of the Panzer III F that is also part of Chapter 2, with the same short 7.5 cm howitzer that the Panzer IV D carries it’s a very good assault tank with a low profile and a big gun. 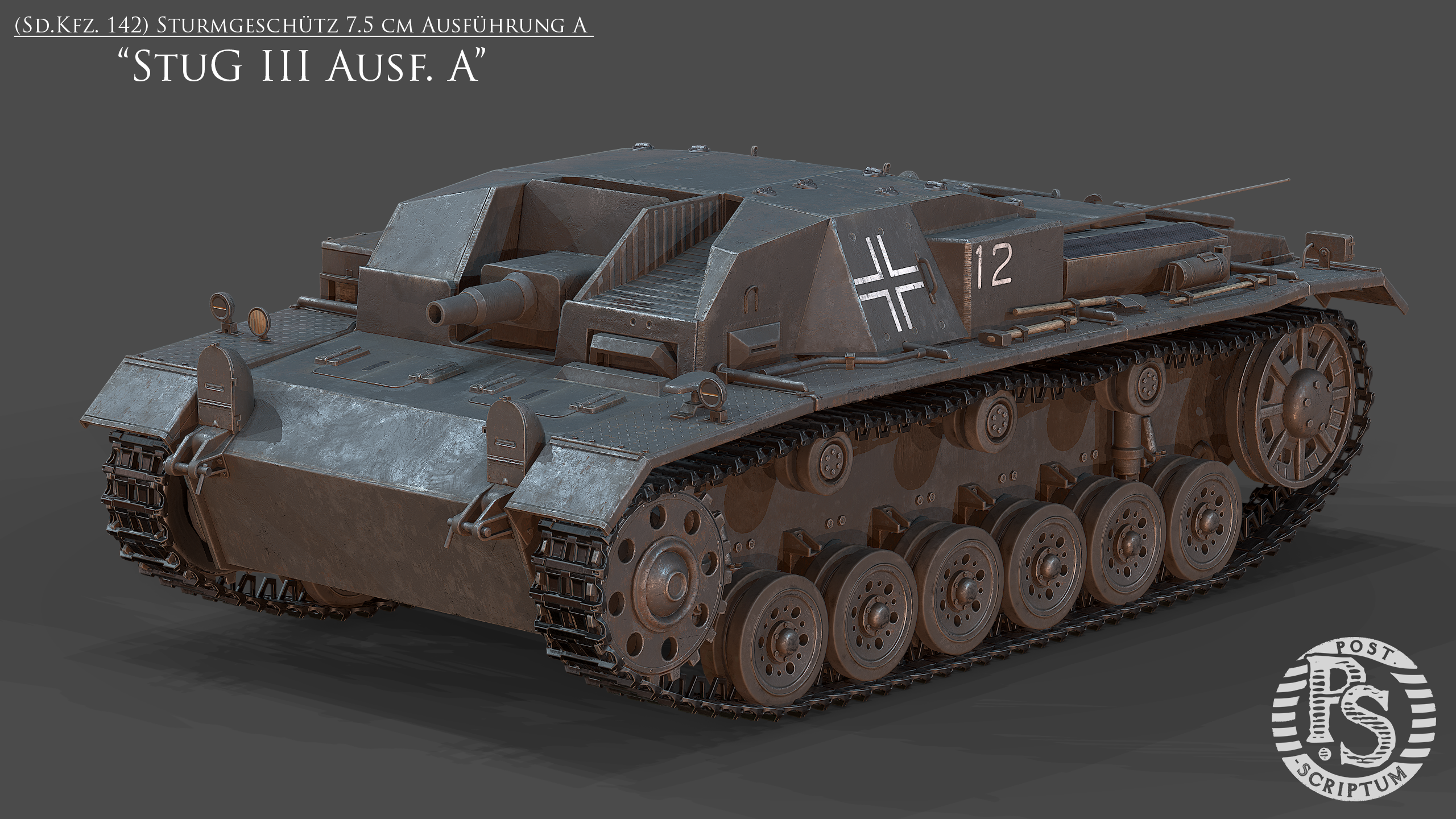 And the most recent entry is one that we’ve been wanting to add in for Chapter 3. We’re bringing in the M3 37mm Anti-Tank gun that at the time Normandy happened was pretty outdated, but we feel that the introduction of a new anti-tank gun within the allied tree is welcomed.

We decided to add this rather than the M5 as it would call for the introduction of several counterparts like the 17-pounder or PaK 40, while we aren’t opposed to their introduction seeing as they were the mainstay of the armies of the time, we need to be careful with such an introduction as they were very powerful guns. Both this and the StuG III will join Post Scriptum in a later update. 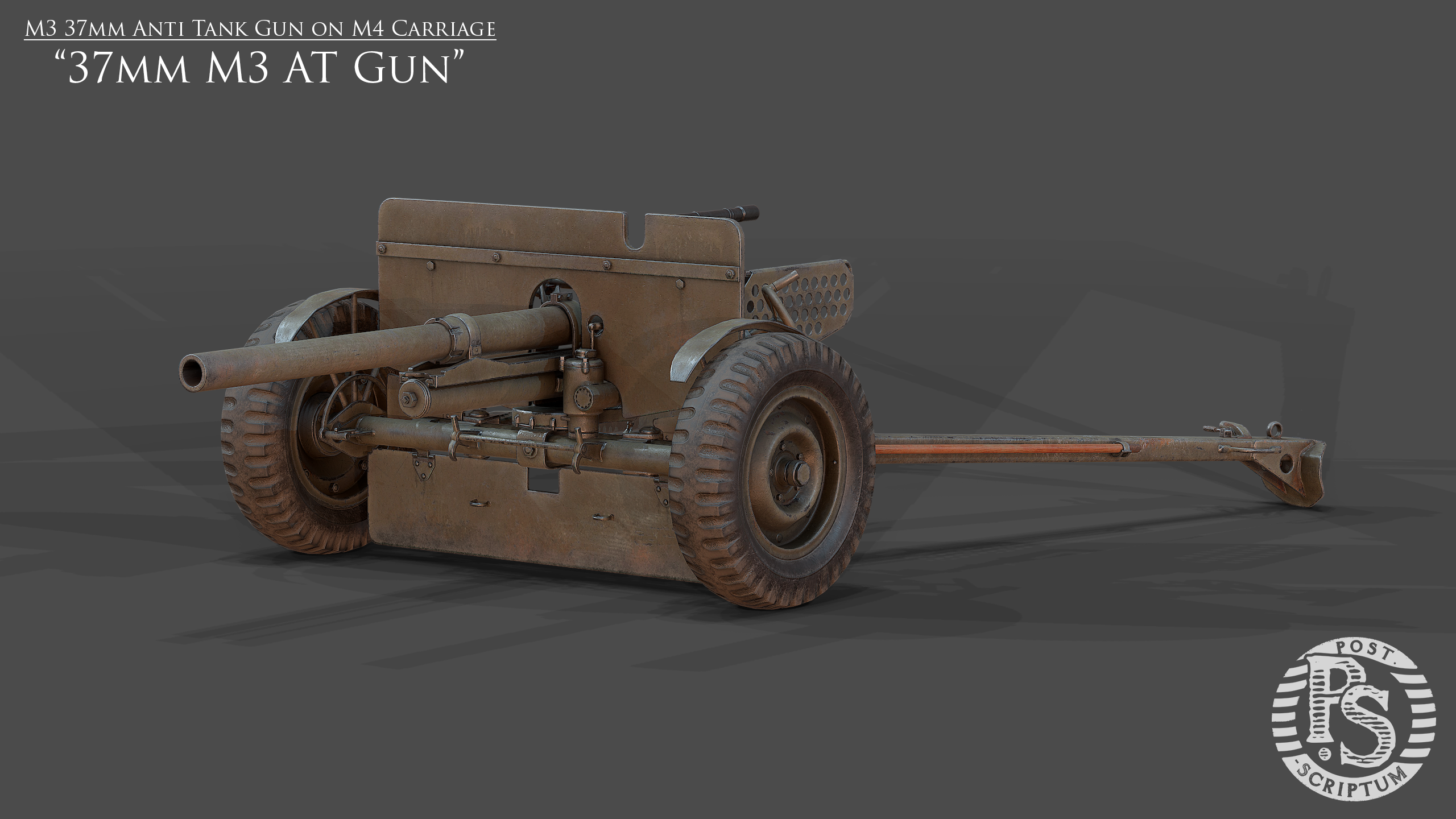 JOIN US ON DISCORD